For the past two years, Gary Haer has held three jobs: Chair of the National Biodiesel Board (NBB), Vice President of Sales and Marketing at the Renewable Energy Group (REG), the largest producer of biodiesel in the 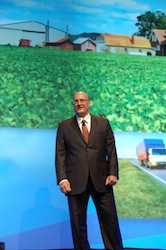 U.S. and soybean producer – he farms on his family farm in Northwest Missouri.

During his presentation during the second day of the 10th Annual NBB Conference Haer noted that it was hard for him to believe this industry was celebrating it’s 20th anniversary (as Joe Jobe said, the industry has reached its teenage years).

Haer described several parallels between the rollercoaster ride that America’s farmers face every season and the market uncertainty battled by the biodiesel industry. He also said that because very few people understand what it really takes to produce food, feed, fiber and fuel, “The biodiesel industry must be even louder in our rallying cries to showcase the diversity of our advanced biofuel.”