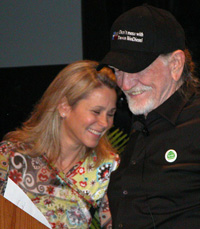 Willie Nelson and his wife Annie received an “Eye On Biodiesel Award” from the National Biodiesel Board this morning. Later, I was able to interview both of them during his big media event at the Pearson Ford Fuel Depot where they announced that they would begin selling “Bio-Willie.”

You can listen to my interview with Willie and Annie here:

It’s always nice to see what’s going on too. I’ve got a short video clip of Willie on stage at the fuel pump promotion:

They had a band which I assume was Willie’s band playing before and after the press conference at Pearson Ford Fuel Depot. You can listen to a song they wrote about Willie buying the Carl’s Corner fuel station in Texas here: