United States Agriculture Department (USDA) Secretary Tom Vilsack addressed a standing room only crowd during the final day of the 10th Annual National Biodiesel Conference & Expo in Las Vegas. Beginning his second term as part of the Obama Administration, prior to taking this position he was the Governor of Iowa. Vilsack has been a leader in the support of biofuels since taking office as Governor and has continued in his current role. 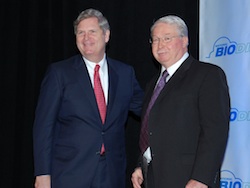 Vilsack said that the biodiesel industry is helping the country become secure through its innovation and products and also helping to create a new biobased economy.

There is a huge fight against the Renewable Fuel Standard (RFS). Vilsack noted that there are some who say it needs to be changed because it’s not reliable and not effective, when in fact it’s exactly the opposite. “This standard is working. It’s doing what’s its supposed to do. It’s helping to create an industry that supports jobs, improves incomes, reduces alliance on foreign oil, and gives consumers choice. It’s working,” said Vilsack.

He also noted that the reason why the biodiesel industry is being challenged is because they are winning. “Trust me,” he said. “If you were losing no one would be paying attention to you. But there is more work to do to meet these challenges.”

Vislack ended his remarks by giving the industry a couple of ideas. One of the most critical, he said, is that it is important to engage people at the state and local level to explain to them the benefits of this industry.

You have the capacity to reignite a new century of innovation and to help redefine and revitalize the American economy, said Vilsack. “And this is worth fighting for.”