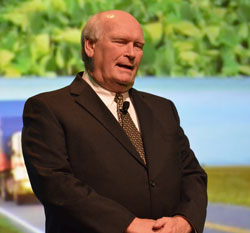 On stage during the general session at this year’s conference was Kenlon Johannes, CEO, Kansas Soybean Commission. Kenlon reminisced about the start of the National Biodiesel Board and conference.

Kenlon says it has been an interesting 20 years and 10 years. He says there were only a few involved at the start with most of the action happening in Missouri. The first five years were the fast growth years when the industry really started to take off.

When it comes to looking back he says there are four phases to how the industry has developed. The first one was trying to figure things out, then convincing the industry itself that an organization was needed, then at the federal level work was done and markets developed and then in the last five years a very concise legislative, research and promotion program has been developed.