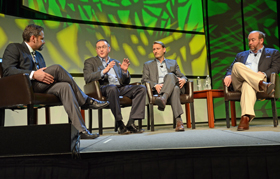 During this year’s conference featured a discussion with industry CEOs led by Joe Jobe. On the panel were Dan Oh, REG; Gene Gebolys, World Energy and Paul Soanes, Renewable Biofuels.

The conference has become very focused on the business of the industry and as you wander around the convention center you’ll see small groups of people having serious business discussions. This is one of the big benefits of attending and this panel was put together to allow everyone a chance to hear some insights from the top level executives at some of the companies that have survived and thrived even with a lot of the uncertainty that has plagued the industry.