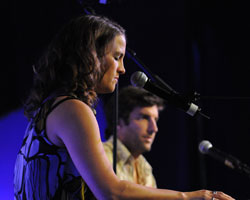 Okay biodiesel fans. I’ve got a lot of content to post here and hope to have it all up by tomorrow afternoon. It’s a travel day home after the end of this year’s conference.

If you’ve ever attended a National Biodiesel Conference then you know Emily Richards and Jason Brock. These music stars are passionate about their belief in renewable fuels and have been regular performers at the conference. This morning they took the stage during the closing general session and played some songs from a new album they’ve put together to promote biodiesel. I’ll have more on that in a later post.

In the meantime, I thought you’d enjoy a video of them being joined on stage by National Biodiesel Board Chairman, Ed Hegland and CEO, Joe Jobe. They did a variation of a song you’ll recognize and so give a listen to “Time For A Fuel Change.”

You can also listen to the song here: [audio:http://www.zimmcomm.biz/nbb/nbc-10-fuel-change.mp3]