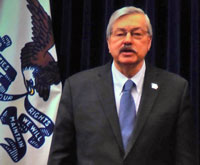 Iowa Governor Terry Branstad received the Eye on Biodiesel National Energy Leadership Award, which the governor accepted via video recording at the National Biodiesel Conference & Expo in San Diego. The state of Iowa is a national leader in clean energy production and is the number one biodiesel producing state in the country, thanks in large part to strong leadership within the state.

“The Iowa biodiesel story is one that I am very proud to tell,” said Branstad, who added that he will be heading to the inauguration of Donald Trump this week. “I’m very optimistic that he will be a strong advocate for renewable fuels as president of this great country.”