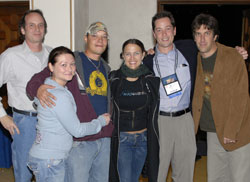 At the Merle Haggard concert last night tonight’s music arrived on the scene. It’s Emily Richards (center) and her band.

They’ll be playing this evening and I’m really looking forward to it. Emily played an awesome concert last year. She’s going to stop by the media room today for an interview which I’ll post for you later. She said she’s got a new song written just for the Conference which she’ll give me a copy of and I’ll post that as well.