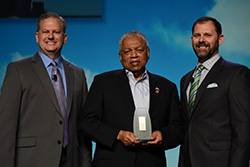 Ronald “Ron” Flowers is the Executive Director of the Greater Washington, D.C. Region Clean Cities Coalition, and the winner of this year’s Eye on Biodiesel Influence Award.

Ron has worked closely with the National Biodiesel Board as well as the National Biodiesel Foundation, resulting in the use of thousands of gallons of B20 blends. His knowledge of fuels and fleets was instrumental in transforming the nation’s capital region from a community of biodiesel naysayers to biodiesel believers. He has been instrumental in the DC Government, Smithsonian Institution, American University and many others switching to biodiesel. With Ron at their side, many of these fleet staff not only switched their own fleets but became champions of biodiesel who mentor their peers to join them in reducing America’s dependence on foreign oil and improving air quality with biodiesel.