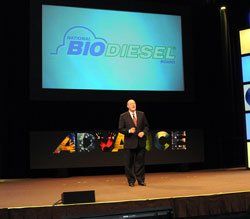 The Chairman of the National Biodiesel Board is Gary Haer, REG. Before he took the stage I spoke with him and he says that everyone is upbeat here at the conference and excited about the prospects in 2011. He says the RFS provides a demand that biodiesel will fill as the only advanced biofuel. He also says that NBB will be working on getting the tax credit back since it complements the RFS.

You can listen to Gary’s stage remarks here: [audio:http://www.zimmcomm.biz/nbb/nbc-11-haer-speech.mp3]

You can listen to my interview with Gary here: [audio:http://www.zimmcomm.biz/nbb/nbc-11-haer-int.mp3]