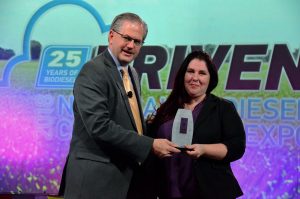 The City of Seattle is one of the leading biodiesel fleet users in America, which made them a clear choice for this year’s Eye on Biodiesel Climate Leader award.

Looking for ways to power their operations in a cleaner, more environmentally friendly way, city fleet directors turned to biodiesel for its carbon reduction benefits and ease of use. In 2014, the city enacted the Green Action Fleet Plan with a goal of reducing their carbon emissions by more than 40 percent by 2020. This began their use of B20 biodiesel blends. Seattle now uses nearly 200,000 gallons of biodiesel per year, significantly lowering their carbon emissions. Along with being an avid user of the fuel, the city also works proactively to educate other fleets who are interested in transitioning to biodiesel by attending and hosting workshops, speaking at national fleet and transportation events, and even partnering with NBB as a featured fleet in the 2015 national biodiesel advertising campaign.