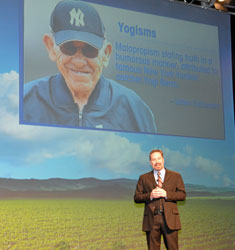 At the opening General Session of the 2016 National Biodiesel Conference & Expo in Tampa Tuesday, there was a theme of the underdog winning the game – and a promise that biodiesel is in the game to win.

“Last year the biodiesel industry demonstrated more than ever that no matter how beat up we are, no matter how outgunned we are, we don’t back down,” said National Biodiesel Board CEO Joe Jobe. “We came together like never before. We stayed true to our principles in the face of deceitful attacks and we achieved the success necessary to put us back on track.”

Though optimistic, Jobe also noted significant challenges still remain. “While our fight is not over, we have a different future. 2016 is going to be our strongest year yet,” he said. “The strategy of disinformation is now being deployed to attack renewable energy and climate change science. Our opponents will continue to use outrageous and desperate tactics as they continue to undermine and work to repeal the only carbon reduction policy currently available in the transportation sector.”

Jobe had a baseball theme to his speech and used many quotes from Yogi Berra, also known as “Yogisms” – and noted that the 5’7″ Yankee was often underestimated. “I bring up Yogi not just because I admire him as a player, a person, a humorist, and a fellow Missouri boy, but because I wanted to illustrate how the biodiesel industry has been underestimated, overshadowed, and underrated,” said Jobe. “And 2016 is the year that we change that.”

Jobe also offered an entertaining illustration of just how amazing biodiesel really is – watch below: