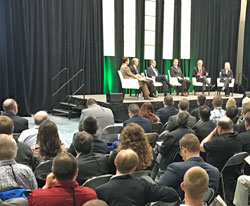 The room was packed for the ever-popular Spotlight on Washington session at the 2017 National Biodiesel Conference, which was more popular than ever this year with the advent of a new presidential administration.

Back by popular demand for the session were former Sen. Byron Dorgan and former Cong. Kenny Hulshof, and they were joined by other DC insiders Jim Massie, Timothy Urban, and Tom Hance. All offered their opinions and insights into what to expect from President Trump, generally along the lines of Dorgan’s first comments. “I don’t know,” he said when asked by NBB’s Anne Steckel about the election and where we go from here. “My head’s still kind of exploding.”